What if politicians were not elected but drawn by lot?

Western democracies are under pressure: low voter turnout, overrepresentation von extreme political parties, corruption, polarisation, political disinformation campaigns are some of the often cited symptoms. But what if elections were part of the problem? How do we ensure the legitimacy needed in order for citizens to feel represented? Could the EU be a forerunner? And can sortition help? In this blog post, Konstantinos Tsakiliotis from the 2018 winning initiative DECIDe gives some insights about the political concept of sortition and discusses possible public online consultations using random sample voting. 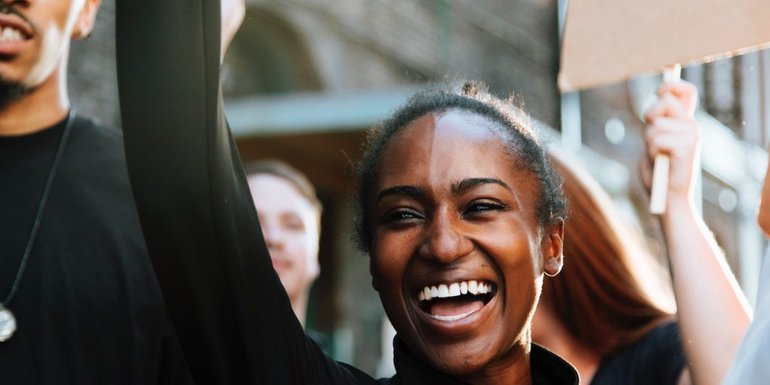 What happened to sortition?

Van Reybrouck raised public awareness about sortition in his influential book ‘Against Elections: The Case for Democracy’.[1] There, he delivers a strong plea for what he calls aleatoric-representative democracy. He defines it as an ‘indirect form of government in which the distinction between ruler and ruled is brought about by sortition rather than election’. Also, he gives a very detailed historic account of sortition forms throughout the centuries. What seemed common practice in the past, simply elapsed in modern democracies.

In classical Athens of the 5th and 4th century B.C. members of the governmental bodies were drawn by lot: the Boule of 500, the Court of Heliaia and 600 out of 700 magistrates. The Court of Heliaia drew hundreds of lots via a sophisticated device called kleroterion out of a pool of 6.000 citizens. Sortition was used to allocate executive, legislative and judicial power. Rotation of the citizens holding offices was strictly implemented resulting in a strong culture of participation in politics: Aristotle echoes this by saying that ‘the basis of a democratic state is liberty… One principle of liberty is for all to rule and be ruled in turn.’[2] In classical Greece the term idiotes was used to negatively describe somebody who was solely occupied with private matters. It is no coincidence that it is where the word idiot roots today. 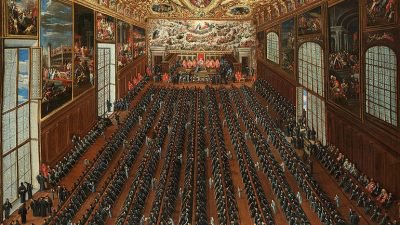 The interior of the Sala Maggior Consiglio, The Doge's Palace, Venice, with patricians voting on a bulletin for the election of new magistrates. Oil on canvas, 120 x 150 cm

This work is in the public domain in its country of origin and other countries and areas where the copyright term is the author's life plus 100 years or less.

Sortition was abandoned during the Middle Ages but was readopted in the Renaissance in the northern Italian cities of Bologna (1245), Vicenza (1264), Novara (1287) and Pisa (1307) and especially in the great Renaissance cities of Venice (1268) and Florence (1328).[3] In Venice, ballote was used to appoint the doge. Venice was an oligarchy controlled by aristocratic families. In order to prevent tensions between them they used a pretty bizarre mixed electoral-aleatoric system to appoint the doge. This included the Consiglio Grande first randomly drawing lots and then expanding the number of the drawn nobles via election and subsequently reducing this number while repeating the same process 9 times until reaching an election commission that consisted of 41 members who ultimately got to elect the doge. This extremely complicated system prevented corruption and endowed the process with legitimacy. Historians agree that sortition coincided with the cultural, economic and political flourish of Venice. In Florence, a different system called imborsazione was implemented. Almost all governmental bodies were drawn by lot. Candidates were first nominated, they were then reduced via elections and again reduced via sortition, while in-between those who had already served or committed crimes were exempted from the procedure.

Montesquieu echoed in ‘The Spirit of Laws’ of 1748 Aristotle by saying that ‘voting by lot is in the nature of democracy; voting by choice is in the nature of aristocracy’ Rousseau considered in ‘The Social Contract’ applying sortition for offices where ‘good sense, justice and integrity are sufficient whereas he favoured elections for positions that required a certain degree of competence such as the military.[4] Despite the ideas of the contemporary philosophers, sortition elapsed in the modern national states after the American and French Revolution. There were practical reasons for that. The scale of the cities where sortition was used in the past was much smaller and no data about the exact population were documented in order to draw a representative sample in the newly born states.

However, it rather seems that the ruling elite decided against sortition in order to preserve their status quo. Although they symbolically elevated the people in their declarations, they were against them holding sovereign powers. They preferred the noble term ‘republic’ to ‘democracy’ which they associated with chaos and political decline, thus consolidating the electoral system as an indispensable element of modern Western democracies. The Universal Declaration of Human Rights of 1948 reads in Article 21 that the will of the people ‘shall be expressed in periodic and genuine elections’.

Institutional random selection is nowadays primarily limited to its application for the appointment of juries in the Anglo-Saxon justice system. The economic crisis of 2008, the Brexit referendum, the US presidential election in 2016 and the parallel increasing influence of social media under the headings ‘fake news’, ‘voter manipulation’ triggered intense discussions about the pathogenesis of modern democracy. As part of the discussions on the possibilities of citizen participation, sortition has again attracted attention in the political arena through several experiments such as the Citizens‘ Assembly in Ireland in 2013, the Citizens Committee on constitutional reform in Iceland in 2010, and the EU Public Consultations in 2007 and 2009. It was also a subject during the French presidential elections of 2017.[5]

Alongside goes a rather extensive discussion not limited to the circles of political science: Hubertus Buchstein and Michael Hein advocated in 2009 the institution of lottery-based chamber in the EU as complementary to the elected European Parliament.[6] David Chaum, a renowned cryptologist for his groundbreaking research in anonymous digital cash transactions who lately introduced Elixxir,[7] a new blockchain platform which promises to facilitate cheap and unprecedented fast consumer-scale transactions, also known for his e-voting solutions, proposed in 2011 random sample voting. Chaum defines RSV as ‘the polling of a random subset of voters that is at least as secure against abuse as current elections’.[8] The white paper echoes in multiple parts the concept of sortition.

On the 12th of October 2012, a workshop under the title ‘The Lottery as a Democratic Theory’ was held by Gil Delannoi (Sciences Po), Oliver Dowlen (QMUL) and Peter Stone (Trinity College Dublin) in collaboration with The Policy Institute at Trinity College Dublin. Various scholars from different research backgrounds came together to discuss the concept of sortition in modern democracies. In their report,[9] they concluded on the main benefits sortition can contribute to the political process:

● Descriptive representation is its main characteristic and advantage. It ensures that every property that appears in the general population is represented in approximately equal proportions on a randomly selected body. For this, the sample must have a significant number of members and, secondly, be drawn out of a pool which consists of the entire population. Statistically, the random sample guarantees that the legal and financial sector are not overrepresented as in many modern parliaments.

● Preventing corruption and domination: The democratic process can be seriously undermined when public officials use their offices to benefit themselves. Sortition prevents this by ensuring that those who seek an office for self-interest are no more likely to receive it than others (unless the majority of the population is motivated likewise).

● Eliminating polarization: This characteristic allowed for the symbiosis of competing aristocratic families in the Italian cities. Political competition, like economic competition, is only desirable if it serves the interest of the general public. Market competition between companies can achieve this through lower prices, higher quality, etc. But market competition fails when companies form cartels. Similarly, political competition between elites may benefit the public if educated, informed and motivated politicians compete for public support by offering socially desirable policies. But this competition does not benefit the general public if the elites either compete too little (through long-term coalitions or political cartels) or too much on the border to civil war. The random selection minimizes the influence of the elites in the vote process.

● No overrepresentation of extremists: Extreme groups are usually sufficiently motivated to undermine the political process. They can claim a measure of political influence that is totally disproportionate to their size. Sorting can mitigate this by ensuring that ‘outliers’ cannot get an oversized representation; if a perfect descriptive representation is achieved, no such group can receive a political office in greater numbers than its presence in the general population would justify.

● Distributive justice: Sortition allows for fair allocation and re-allocation of power within a democratic society.

● Participation: It can be said that sortition makes participation possible by allowing broader sections of the population to participate – especially people who are traditionally excluded from the political process because of poverty, race, ethnicity and other discriminatory factors.

Rotation means that there is a change in office, that the people in power today are not the same as the people who are in power tomorrow. It reflects the Aristotelian ideal of ‘governing and being governed’.

Increased responsibility as an incentive for better decision: The report refers to the psychological effects of sortition. David Chaum argues in the RSV white paper that sortition increases the sense of responsibility of the drawn citizens.[10] They feel obliged to do good for society as one of the few chosen ones.

The advantages mentioned above do not comprise an exclusive list. The question is, how to ameliorate the political system via applying sortition? What institutional forms of sortition are needed? Could sortition help modern democracies guarantee efficiency and legitimacy while confronting the risks of globalisation and digitisation?