A crack runs through Agnés’s kitchen table. She can hardly talk anymore with her husband and their three children about politics, refugees or Hungary’s role in Europe. These moments take on the forms of arguments that make them rigid and that hover, vehement and aggressive, over the family’s conversations or a bottomless, stunning silence. Agnés and her husband Péter stand at either end of a spectrum of values. She represents the values of open society: tolerance and openness in dealing with diversity. He argues for the nationalist policies of the Hungarian government.

It’s the same all over Europe. Our debates have become more colourful in recent years, but at the same time they are harsher, more polarized and fragmented. Hate speech, populism and nationalist positions are entering the political mainstream and are in direct opposition to the idea of ​​an open society. Long-valid certainties no longer apply.

"We are civil society in our roles as citizens, families, migrants and newcomers when we take a stand in the public space for the issues that matter to us"

This is how we are all living together in Europe now. All of us, we are “civil society.” We are civil society in our roles as citizens, families, migrants and newcomers when we take a stand in the public space for the issues that matter to us, whether community gardening, singing in a choir or protecting the environment. When we act out of anger, love, passion or outrage and stand up for our values. A free, diverse and active civil society is a feature of a functioning democracy and contributes significantly to making societies more equitable.

Some of the Advocate Europe change-makers in action. Photo credit: Panos Georgiou.

Civil society actors act as an impetus for new ideas; they fill in the gaps left by the private and public sector, provide information where governments and political systems have blind spots and give a voice to people at the margins of society.

"What price are we willing to pay for our social commitment? What are our personal limits? How do we gather new strength when we are exhausted and run-down? Who’ll stand by us? "

A look at everyday life shows the different realities and challenges of practical work “in the field.” What’s written here comes from what I’ve heard, seen and experienced over five years in my work with civil society organizations from more than 40 European countries. I’m worried about the people, their families and their future. I want to report on them, about people like Agnés and her husband Péter. I’ve changed the names to protect their identities. For, almost unnoticed, many lines have shifted in recent years.

Stephen, head of a local organization in Manchester, can’t think, or even speak anymore about the Brexit – it drains, disillusions and makes him angry. What he stands for and fought for has become lost in his reality. Milica from Belgrade lost her position at university because she made too much of a fuss with her volunteer initiative advocating a basic level of transparency and access to public finance information in the Serbian capital. She is still able to live in the country and pursue her civic activities, but her financial future looks uncertain. It’s a different story for Elif, who’s no longer able to carry out her work for cultural dialogue between Turkey and other European countries in her own land. She’s been in Germany since the summer of 2018. It was not an easy decision for her – she would prefer to operate on site. Michael helped set up a Berlin refugee organization. Regardless of hate speech, threats and online obituaries someone posted, he carries on and doesn’t allow himself to be intimidated. He never could have imagined earlier that he would have to live for several months under German police protection. Liv from Denmark recently abandoned her career in television and is now campaigning for basic democratic education. She wants to bring the Scandinavian understanding of “democracy as a lived practice” to Europe, also for her daughter, to whom she hopes to leave a better world.

"Now is the time to capture this diversity, expand it and shape the future with it."

What price are we willing to pay for our social commitment? What are our personal limits? How do we gather new strength when we are exhausted and run-down? Who’ll stand by us? Who isn’t getting involved and why? And always, again and again: How can we sustainably and appropriately finance our work?

Agnés and Péter’s reality reflects the bigger question of the political, which affects us differently, more vehemently and more urgently than just five years ago. The landscape of political and civic actors is rearranging itself and major lines of conflict characterize the work. In the midst of all this disparity we ask ourselves how, in polarized societies, can spaces and dialogues function in which people of different backgrounds and opinions participate, find common ground, name and endure boundaries without their humanity being hurt. How do we come together in our differences? In short, how do we shape our future? We are looking for answers – together. 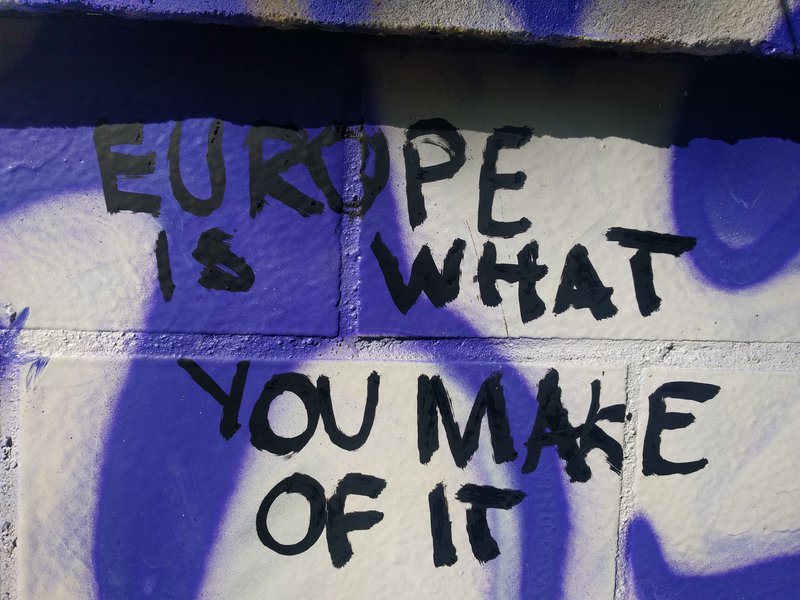 The social space has always been political, non-partisan and, at its best, colourful. This is where the diversity of all ideas comes together. And this diversity is a strength of our commonality. Because that’s exactly what we are, all together: heterogeneous, different and diverse. Now is the time to capture this diversity, expand it and shape the future with it.

The fact that it works has been proven again and again the work of civil society, which brings people together and enables dialogue and opening. I could cite a number of examples from my work, but more importantly we can all join in – each in our own way. By listening to our neighbours, by going to the European elections and voting for the values that are important, by supporting petitions or demonstrations on matters that move us, by donating to civil society organizations, by talking to people – analogue and without the Internet – in genuine debates and much, much more.

“Perhaps civil society’s most important contribution has been its ability to give people hope,” writes the former UN Special Rapporteur, Maina Kiai. This is an immeasurable effect that is the starting point of every achievement. For without hope there is no commitment and no change.

This blog post was originally published in German on 23.04.2019 on the Stiftung Mercator Blog.