In a society that has become highly digital and in which people have very little time, social media have become the central arena for the collective construction of knowledge. It involves, of course, knowledge on mathematics or cooking, but also discussions about politics and historical facts. And that is when things get tangled.

The TraceMap team at our network meeting in Maribor, November 2018

You are reading this text online. How did you get here? Through a search engine? Did you find it in a social medium posted by someone? Does the way you will interpret this text depend on who recommended it to you? Is the topic and style going to keep you interested until the end? Are you going to visit the pages I linked in the text? And how will you organize your thoughts about this text for further reference in case you want to?

Now apply these questions for every single text you’ve ever encountered on- and offline. And for every human being that ever lived on this planet. At this point, you should have formed a mental image of an intricate network of knowledge production, distribution, (access?) and consumption. How will a piece of content operate on you? And when does it establish as common knowledge?

Think of every piece of information circulating in social media as a package. Doesn’t matter if it is an image, text, video, interactive app or some kind of combination of them. After each package is produced it will eventually be distributed – sometimes going viral and establishing a collective memory. Their spreading mechanisms are quite complex.

First, the packages that will reach you depend on your acquaintances. At this stage, the process I’m describing still looks like a transport network, with traffic lights, controllers and jams, nothing too complicated except for the complex underlying social structure instead of streets. Once it is delivered, it will challenge the reader: is the headline strong enough? Will it convince me to click further and read the text? Can I trust its content? Now, things start to get subjective. 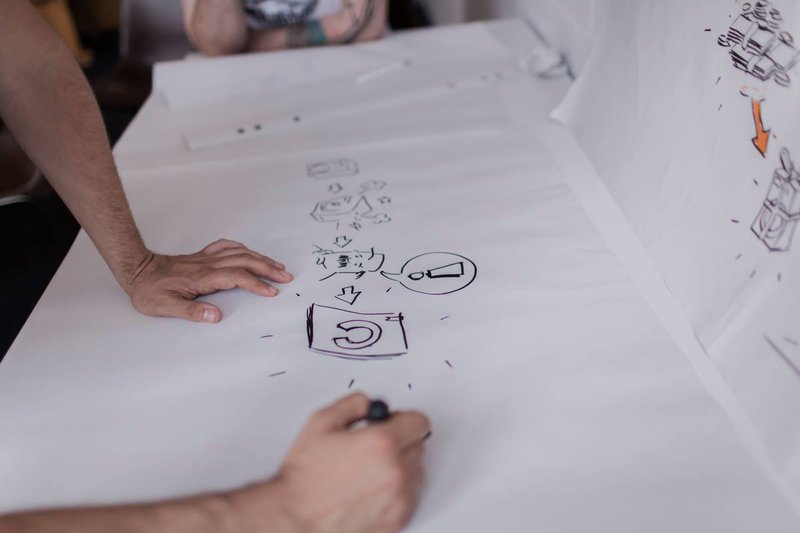 Who delivered that package to me? Most likely, I will use the answer to this question to interpret what I am reading. Can I trust that person? (Was it that uncle of mine that only posts suspicious texts?) Trusting the person who recommended a text usually adds a layer of trust to the text itself. How much knowledge do I have about the topic? Which sentences are stated as facts? Some people will trust their gut feeling more than anything, being subject to many of the cognitive biases and misinterpretations of the brain. Flat-earthers included. Others will try to use several sophisticated criteria to assess the trustworthiness of the stated facts, not really getting rid of biases. Are there really true facts whatsoever?

Repeat a lie often enough and it becomes the truth. It doesn’t matter what is really true or false, virality determines what will become a collective memory. And what is driving virality is affection.

The Financial Fabric of our Short-Term Digital Memories

The economic powerhouse of the internet is the ad industry – which, in turn, feeds on people’s attention. Once something goes viral, it draws the attention to specific facts – „alternative“ or not. What is in the spotlight? Cat memes, Kim Kardashian or the latest news in nuclear fusion? It depends on how the package is framed, the marketing (psychological) strategies behind its aesthetics. The thing is, the viral stuff that will constitute collective memories in the future triggers lots of clicks and drives whole economies generating revenue – oftentimes for the fake-news industry. And what drives economy also drives politics.

We have seen the vote-influencing machinery developed by Cambridge Analytica (a.k.a. behavioral microtargeting) radically change the way political campaigns operate. Political lies and promises were always part of the landscape, but the precision with which the „right“ packages were delivered to specific groups of people to manipulate their opinions made it explicit how fragile our democracies are. Well-crafted and laser-targeted packages of fake news are misleading a considerable amount of people. Automated bots detect and surf the ephemeral attention waves, generating revenue and spreading misinformation. How well-informed should a person be to chose their representative and not somebody else’s? 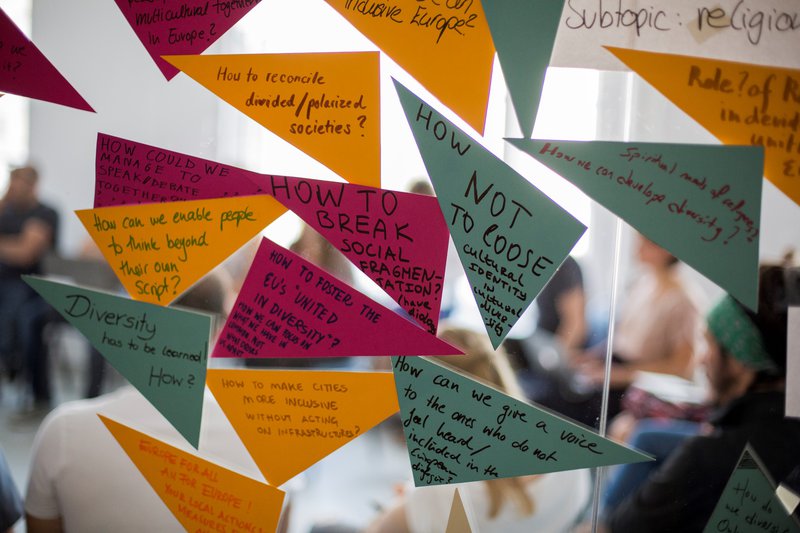 Collecting ideas in an analog way.

Microtargeting can only work because our private data and metadata have become a product for third-party enterprises. This means that someone else is using the value we generate as users to produce revenue. And that our data might be used against us if it arrives at our enemies‘ hands – enough money can buy all sorts of sensitive, private data.

Selling private data is the core of the toxic business models around the web, social media included. Facebook, Twitter, Google, Amazon and co. have several lock-in mechanisms that keep their users imprisoned and dependent, even when they want to leave. Scandal after scandal, their data silos and power are getting bigger and their monopolies are not really being avoided as they should. How to repair this mess?

A Light at the End of the Dystopian Tunnel

Let’s zoom out to the big picture: the architectures of social media are shaping to a great extent our social and political interactions – and threatening very basic principles of democracy. Most of the content published on social media cannot be easily found or referenced, provoking a sort of collective memory loss or attention disorder. The current models upon which the giants are based are problematic for several reasons, and it is fundamental to diagnose where they fail to design the antidotes we need. How to build a sustainable digital ecosystem?

We should be designing the online spaces not for maximizing growth or shareholder profits, but for allowing a safe, diverse and open construction of collective knowledge. We need social media that foster non-violent communication, in which users have a deep sense of responsibility for what they say. We need transparent regulation mechanisms that give users full control of their content filters. We need to build a common linguistic ground so that we can keep track of History, even if the narratives are different and we politely agree to disagree. We also need mechanisms to collaboratively detect and flag false narratives as soon as they are produced.

We need decentralized technologies that empower users to use their data in their own benefits. Micropayments included. We need private data to be portable, so that users can carry it with them wherever they decide to go. We need interoperable technologies that allow users to switch between services without getting locked inside specific platforms, enabling the natural selection of market competition and cooperation to operate instead of pretending the market is actually free. We need better-organized platforms on which our knowledge will be built – enabling full content and meta-content search, citing with precision and with an intuitive interface. 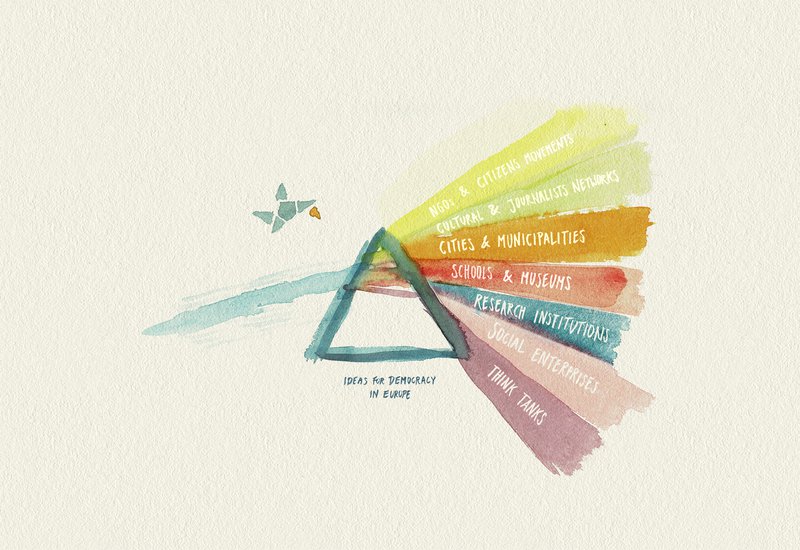 Vizualisation of the diversity of ideas for Europe that were submitted to our idea challenge.

Opening up knowledge is the most obvious way out of this systemic crisis. It involves making education inclusive and bringing knowledge paywalls down. But unlocking data silos and democratizing knowledge means decentralizing power – which always bothers the lobbyist tech giants. Luckily enough, there are many purpose-driven projects, organizations, initiatives and digital activists that are contributing to the technological building that will enable re-configuring the settings of our organization as a society.

And that is what we are doing in association with WorldBrain. We are now using Memex – a technology developed by Worldbrain – as the infrastructure of a systemic model for collective knowledge organization to empower independent journalists, content creators, researchers and fact-checkers in all steps necessary for the construction of well-founded narratives. It consists of a fundamentally different way of organizing and processing information to fight misinformation: from the underlying economic and revenue models through the way data and metadata are treated all the way up to the abilities to organize, classify, analyze and annotate on content – individually or collectively.

Remembering is the substance of knowledge. Strengthening our collective memories involves decoupling them from economic interests. Giving users ownership over their data by design must be the basis of innovative solutions that aim at sustainability. The challenges are obviously many, but a revolution has already started.

This text was initially published on the 03.04.2019 on the Website of democracy.io